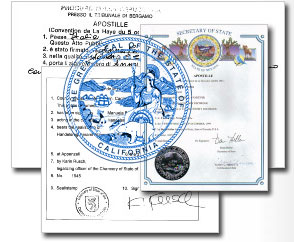 Documents which have been notarized by a notary public, and certain other documents must be “legalized” if they are intended to be used in other countries.

In 1961 many nations joined together to create a simplified method of “legalizing” documents for universal recognition. Members of the conference, referred to as the Hague Convention, adopted a document referred to as an Apostille that would be recognized by all member nations.

Documents sent to member nations, completed with an Apostille at the state level, may be submitted directly to the member nation without further action.

Since October 15, 1981, the United States has been part of the 1961 Hague Convention, abolishing the Requirement of Legalization for Foreign Public Documents. The Convention provides for the simplified certification of public (including notarized) documents to be used in countries that have joined the convention. With this certification by the Hague Convention apostille, the document is entitled to recognition in the country of intended use, and no certification by the Authentications Office or legalization by the embassy or consulate of the foreign country where the document is to be used is required. The Authentications Office only certify to documents from other federal agencies and officials from foreign governments with the apostille.

In countries which are not signatories to the 1961 convention and do not recognize the apostille, a foreign public document must be legalized by a consular officer of the country from which the document is issued.